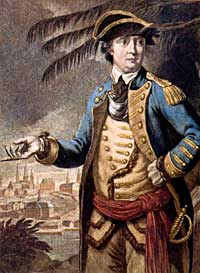 Benedict Arnold was born in January 1741 in Norwich, Connecticut, but there have been times the town wasn’t eager to publicize that fact. The Norwich Bulletin reports that the town will start commemorating that history with a new spirit this fall:


Arnold will be the subject of a new, original musical at the Spirit of Broadway Theater in just a few months. Rarely-seen artifacts from his homestead will be on display at the Leffingwell House Museum. And there’s even a planned Benedict Arnold walking tour built around his old stomping grounds. . . .

The musical, with a working title of “Benedict Arnold,” is being written by Jeffrey Lodin, William Squier and Richard Vetere. It’s set to run from Sept. 11 through Oct. 13, and will be a part of the theater’s schedule for at least the next three years, Bernardini said. It’s [sic] tagline is, “He pledged allegiance…but to who?” . . .

Arnold remains such a lightning rod that Bernardini said many faithful Spirit of Broadway donors have withdrawn funding for the enterprise. It cost about $30,000 to commission the work, and another $100,000 in production costs, he said.

The Spirit of Broadway Theater appears to be dedicated to creating new musicals of all sorts. Watch this webpage for more information about this revolutionary production.
PERMANENT LINK: 08:30
Share