“Succeeded with Liberty and Property and three Cheers” 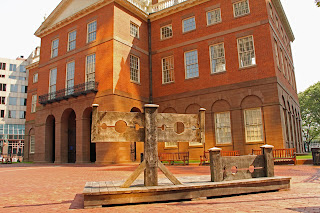 After being surrounded by five hundred men on horseback, detained in a Wethersfield tavern for three hours, and warned by the crowd leader that he wasn’t sure he could contain them any longer, Connecticut stamp agent Jared Ingersoll finally reached his limit.

“I now thought it was Time to submit,” he wrote a few days later.


I told him I did not think the Cause worth dying for, and that I would do whatever they should desire me to do. Upon this I look’d out at a front Window, beckoned the People and told ’em, I had consented to comply with their Desires; and only waited to have something drawn up for me to sign. We then went to Work to prepare the Draught. I attempted to make one myself; but they not liking it, said they would draw one themselves, which they did, and I signed it.

They then told me that the People insisted on my being Sworn never to execute the Office. This I refused to do somewhat peremtorily; urging that I thought it would be a Prophanation of an Oath. The Committee seemed to think it might be dispensed with; but said the People would not excuse it. One of the Committee however said, he would go down and try to persuade them off from it. I saw him from my Window amidst the Circle, and observing that the People seemed more and more fixt in their Resolution of insisting upon it, I got up and told the People in the Room, I would go and throw myself among them, and went down, they following me.

When I came to the Circle, they opened and let me in, when I mounted a Chair which stood there by a Table, and having pulled off my Hat and beckoned Silence, I proceeded to read off the Declaration which I had signed; and then proceeded to tell them, that I believed I was as averse to the Stamp-Act as any of them; that I had accepted my Appointment to this Office, I thought upon the fairest Motives; finding, however, how very obnoxious it was to the People, I had found myself in a very disagreeable Situation ever since my coming Home; that I found myself, at the same Time, under such Obligations that I did not think myself at Liberty peremtorily to resign my Office without the Leave of those who appointed me; that I was very sorry to see the Country in the Situation it was; that I could nevertheless, in some Measure, excuse the People, as I believed they were actuated, by a real though, I feared, a misguided Zeal for the Good of their Country; and that I wished the Transactions of that Day might prove happy for this Colony, tho’ I must own to them, I very much feared the Contrary;—and much more to the same Purpose.

Remarkably, this rehash of Ingersoll’s arguments for the past month combined with new chidings and warnings didn’t get the crowd all angry again. I have to assume those men were tired of waiting around. Or maybe they just stopped listening after a while. They were clearly more interested in seeing Ingersoll go through rituals of crowd deference and patriotism:


When I had done, a Person who stood near me, told me to give Liberty and Property, with three Cheers, which I did, throwing up my Hat into the Air; this was followed by loud Huzzas; and then the People many of them were pleased to take me by the Hand and tell me I was restored to their former Friendship.

I then went with two or three more to a neighbouring House, where we dined. I was then told the Company expected to wait on me into Hartford, where they expected I should publish my Declaration again. I reminded them of what they had before told me, that it might possibly ensnare the Assembly for them to have an Opportunity to act, or do any Thing about this Matter. Some inclined to forego this Step, but the main Body insisted on it.

We accordingly mounted, I believe by this Time to the Number of near one Thousand and rode into Hartford, the Assembly then sitting. They dismounted opposite the Assembly House, and about twenty Yards from it. Some of them conducted me into an adjoining Tavern, while the main Body drew up Four abreast and marched in Form round the Court House, preceeded by three Trumpets sounding; then formed into a Semi-circle at the Door of the Tavern. I was then directed to go down and read the Paper I had signed, and which I did within the Presence and Hearing of the Assembly; and only added that I wisht the Consequences of this Day’s Transaction might be happy. This was succeeded with Liberty and Property and three Cheers; soon after which the People began to draw off, and I suppose went Home. I understand they came out with eight Days Provision, determined to find me, if in the Colony.

Those were some very determined citizens.

And what about Connecticut’s officeholders? The legislature that had sent Ingersoll to London to represent the colony in 1764, the governor he had consulted with the day before, the delegates who had ridden past the tavern where the crowd was holding him as he called to them from a window? They had more natural sympathy with Ingersoll, but they hadn’t been any help to him at all.


I am told the Assembly were busy in forming some Plan for my Relief, the lower House thinking to send any Force, was it in their Power, might do more hurt than good to me, agreed to advise the sending some Persons of Influence to interpose by Persuasion, &c. and communicated their Desire to the upper Board, in Consequence whereof certain Gentlemen of the House were desired and were about to come to my Relief, it being about half an Hour’s Ride; but before they set out they heard the Matter was finished.

Had they come, I conclude it would have had no Effect.

With Ingersoll’s unconditional, written, publicly repeated resignation on 19 Sept 1765, there were no stamp agents left in New England or New York. Protests on the Boston model were spreading to the Middle and Southern Colonies.

But in six weeks, at the start of November, the Stamp Act was still supposed to take effect.

(The photo above shows the Old State House in Hartford. It wasn’t built until 1796, three decades after Ingersoll’s experience. But it’s a handsome building.)
PERMANENT LINK: 08:30
Share